Francisco Suárez was a principal figure in the transition from scholastic to modern natural law, summing up a long and rich tradition and providing much material both for adoption and controversy in the seventeenth century and beyond. Most of the selections translated in this volume are from 'On the Laws and God the Law-Giver (De legibus ac Deo legislatore, 1612)', a work that is considered one of Suárez' greatest achievements. Working within the framework originally elaborated by Thomas Aquinas, Suárez treated humanity as the subject of four different laws, which together guide human beings toward the ends of which they are capable. Suárez achieved a double objective in his systematic account of moral activity. First, he examined and synthesized the entire scholastic heritage of thinking on this topic, identifying the key issues of debate and the key authors who had formulated the different positions most incisively. Second, he went beyond this heritage of authorities to present a new account of human moral action and its relationship to the law. Treading a fine line between those to whom moral directives are purely a matter of reason and those to whom they are purely a matter of a commanding will, Suárez attempted to show how both human reason and the command of the lawgiver dictate the moral space of human action. 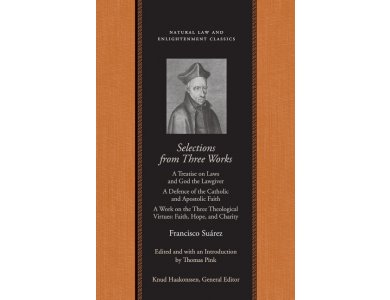 Francisco Suarez was a principal figure in the transition from scholastic to modern natural law, sum...
€14.00